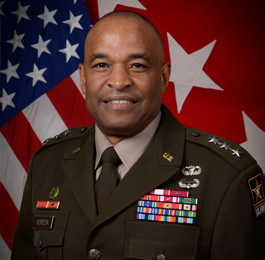 Lieutenant General Kevin Vereen is the Deputy Chief of Staff, G-9. The DCS, G-9 leads integration across the Army Enterprise to modernize installations, enhance quality of life, and develop and implement policies, plans and programs that enable the Army to recruit, train, deploy, fight, and win. His appointment was effective 22 September 2022.

As the Deputy Chief of Staff, G-9 Lieutenant General Kevin Vereen leads dedicated professionals who drive excellence across the Army Installations Enterprise to support Soldiers, Families, and Army Civilians wherever they train, work, and live. The Deputy Chief of Staff, G-9 is the primary advisor to Army Senior Leadership on military installation services, infrastructure, investment requirements and environmental management and stewardship. The DCS, G-9 also oversees and advises on funding, both appropriated and non- appropriated, for Morale, Welfare and Recreation program execution.

Prior to Deputy Chief of Staff, G-9 Lieutenant General Kevin Vereen was Commanding General of U.S. Army Recruiting Command at Fort Knox, Kentucky from July 2020 to September 2022. He led over 14,000 in more than 1,400 locations globally with the focus on recruiting the next generation of Army Soldiers. His military career began in 1988 in field artillery and spans an impressive 34 years.

In 1990 he transitioned to the military police. During his over 30-year career as a military police officer, Lieutenant General Vereen has held notable worldwide assignments in leadership roles to include Commandant of the Military Police Regiment, the Army’s Provost Marshal General, and Commanding General of U.S. Army Criminal Investigation Command. In these roles Lieutenant General Kevin Vereen has served as the principal military advisor on policing matters to include the Department of the Army’s independent criminal investigative authority reporting directly to the Secretary of the Army and the Chief of Staff of the Army.

Lieutenant General Vereen is the Army’s Liaison for the Boys and Girls Club of America; he is also a Board Member of the Army Emergency Relief and sits on the Board of the Army & Air Force Exchange Service (AAFES). Lieutenant Kevin Vereen is a native of Fayetteville, North Carolina, and a graduate of Campbell University.